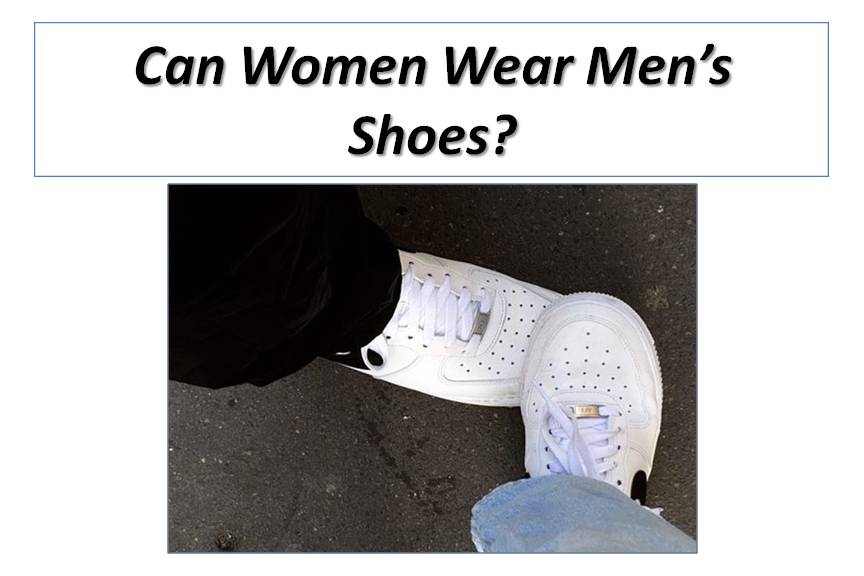 When you walk into a shoe shop, the first thing you will probably notice is that it is sectioned into children’s, men’s, and women’s shoes. Does that mean you are confined to shopping only within the women’s section? This question also begs the question: Can women wear men’s shoes and vice versa? There is much more to this matter and a simple no or yes answer will not suffice. Keep reading to find out if it is worth adding men’s shoes to your wardrobe or not.

There are little differences between women’s and men’s shoes aside from sizing. Generally, men’s shoes are longer and broader than women’s options and you will never find conventional women’s styles like high heels within the men’s department. Moreover, even though most shoe stores categorize footwear in women’s and men’s sections because of differences in sizing, you may have observed that the men’s department of a footwear shop has more choices and at times more affordable shoes. By now, you may be wondering if shoes ‘for women’ and ‘for men’ are based on experimentation and science, or if they are merely part of marketing language.

Some individuals believe that splitting shoes by gender seem illogical and absurd. Oftentimes, it is difficult to differentiate between a woman’s shoe and a man’s shoe. For example, aside from the size, men’s and women’s sneakers have essentially the same construction.

So Why Do Shoe Shops Divide their Products by Gender?

The reason for this may be that these stores want to market their shoes to specific genders. Most shoe retailers claim that shoes are sectioned by gender because their customers prefer to shop that way. Nevertheless, many customers do not agree with this claim. There is no doubt that most consumers would prefer to have the adult footwear all in one place. So, the next time you find yourself in a shoe shop, feel free to stroll into the men’s department to locate that amazing pair of walking shoes.

Differences Between Women’s and Men’s Shoes

As mentioned earlier, there are subtle differences between ‘shoes for women’ and ‘shoes for men’. It appears most shoe manufacturers randomly decide on factors like color, sizing, and style. Historically, footwear for men has usually come in brown, black, or tan while women’s shoes come in a variety of colors but mostly pink and other bright colors.

Aside from color, other areas that women’s and men’s footwear differ include the following:

Women’s and men’s shoes differ in their width and tightness. Female feet differ in shape and size from that of the male. To account for this, women’s shoes are made broader in the toe and forefoot region and narrower within the heel, in comparison with the corresponding men’s footwear. Also, men’s footwear is typically broader and sized larger compared to women’s shoes.

Generally, men are bigger and have more muscle (about 15 percent more) than women have. For this reason, women weigh less compared to men of similar height and shoe size. Consequently, most women’s shoes typically have a softer and lighter midsole compared to the men’s counterpart. This is because such midsoles are designed to bear 15 percent less shock as each foot hits the ground. Some shoe producers even employ different materials and fabrics for the midsole in their men’s and women’s shoe versions, and this can affect the weight, comfort and fit of the shoes.

Apart from differences in foot shape, women pronate more compared to men. This is because the angle of women’s quadriceps in relation to their hips is greater. Thus, the ankle needs to roll more to reduce strain on the feet during walking or running. Women’s footwear typically offers additional support to help alleviate this problem.

Most shoe manufacturers have produced a wide variety of footwear types engineered to cater to different requirements and inclinations. However, by now you should have realized that there is really no point in gendering shoes. The differences should only be about size, style, foot issues, and comfort.

As stated earlier, women’s shoes come in a wider range of colors and styles compared to their men’s counterparts. However, these choices may come at higher costs than the male ones. If conventional shoe colors such as black and brown work for you, then get yourself a nice pair of durable men’s shoes and save some money.

You need a pair of supportive and comfortable footwear if you work on your feet for extended periods. Some work footwear for men delivers more support to the feet compared to work shoes designed for women. Sturdy men’s work shoes provide better ankle support and may help shield you from sprains and injury.

If there is a particular pair of men’s shoes you like and cannot find the female version of it, you can try the men’s version. Begin with a size smaller compared to your regular women’s shoe size. When you have no choice between women’s and men’s styles, nothing should prevent you from purchasing the footwear you desire.

If men’s shoes are more comfortable for you, go for it. Work should not be the only reason to include men’s styles in your collection. You can pair men’s casual or work shoes with your preferred dresses.

Even though there are a few differences between women’s and men’s shoes, these variations should not prevent you from finding your perfect fit. So, why not check out some pairs of men’s shoes when next you go shopping.

No votes so far! Be the first to rate this post.

I am a professional web developer, copywriter, digital marketer, content marketer and SEO manager. Writing is my passion and I am dedicated to providing my best work.

Why Are Rothy’s So Expensive?

Top 12 Best Skechers for Nurses and other Healthcare Workers

8 Best Dansko Shoes for Nurses – Get Comfort with Style

8 Best Shoes for Office Work Ladies (That Are Also Cute)